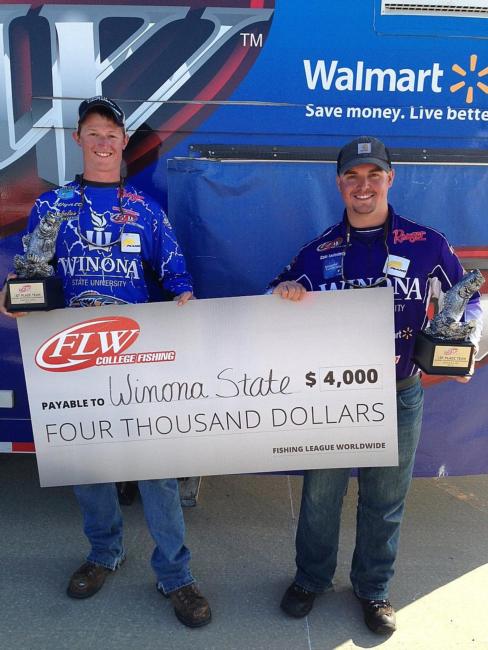 “This is a big win for me,” said Laufenberg, a senior majoring in Individual Studies. “If we didn’t qualify for the National Championship, this would’ve been my last tournament as a collegiate angler.”

“Coming into this tournament, our main goal was to qualify to fish for the national title,” said Stout, a junior majoring in Biology. “If we didn’t produce, we were done. That was the mindset we stayed in throughout the weekend.”

Laufenberg said the duo originally planned on fishing riprap Saturday but changed their strategy when they stumbled onto a ripe creek point on the southwest corner of the lake.

“We looked at our graphs and noticed there were a bunch of submerged stumps along a drop, about 50 yards from shore,” said Laufenberg. “It looked like one of those perfect spots where we figured fish would migrate to.”

The duo said they dragged a green-pumpkin Lethal Weapon Jig rigged with a Zoom Speed Craw and a brown and black-colored jig with a PowerBait Chigger Craw.

“Every time we found a piece of cover like a log we made 10 or 12 casts to it from different angles,” said Stout. “We milked the area for everything it was worth and caught our four stringer fish fairly quick.”

The team said they followed the exact same pattern on Sunday but were unable to catch any keepers.

The top eight teams that advanced to the 2016 FLW College Fishing National Championship are:

Complete results can be found at FLWFishing.com

The FLW College Fishing Central Conference Championship was hosted by the City of Carlyle.

College Fishing is free to enter. All participants must be registered, full-time students at a college, university or community college and members of a fishing club recognized by their college or university.

FLW is the industry’s premier tournament-fishing organization, providing anglers of all skill levels the opportunity to compete for millions in prize money nationwide in 2015 over the course of 240 tournaments across five tournament circuits, four of which provide an avenue to the sport’s richest payday and most coveted championship trophy – the Forrest Wood Cup. FLW tournament fishing can be seen on the Emmy-nominated “FLW” television show and is broadcast to more than 564 million households worldwide, making it the most widely distributed weekly outdoors-sports television show in the world. For more information about FLW visit FLWFishing.com and look for FLW on Twitter, Facebook, Instagram and YouTube.