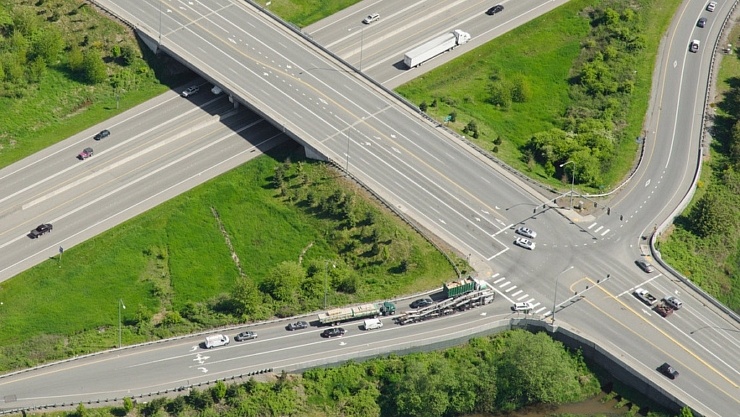 • Interstate 70 (St. Louis, MO & Indianapolis, IN) is approximately 18 miles to the north

The Mission of South Central Transit (SCT) is to provide safe, reliable and cost-effective public transportation to the citizens of the communities they serve. SCT has offices located in Breese, Centralia, Mt. Vernon, Du Quion, and West Frankfort.

The Clinton County, Purple Martin Shuttle has stops in Aviston, Breese, Beckemeyer, Carlyle, New Baden, Trenton, and connects with the Cardinals shuttle at Kaskaskia College. It travels a fixed route Monday – Friday.  Follow the link to the shuttles page for the current shuttle schedules. SCT Schedule

Four airports are located within 62 miles of Carlyle.

Located in Mascoutah, Illinois, is 30 miles west of Carlyle. MidAmerica offers opportunities for commercial cargo transportation and for passenger travel to Las Vegas and Orlando through Allegiant Air.

Located approximately 16 miles north of Carlyle on State Route 127. The Airport can handle most aircraft up through the Citation and Lear Jet classes. The Airport also provides a lighted runway, rental hangars, fueling, and mechanic and pilot services.

Located approximately 23 miles southeast of Carlyle, the airport is owned by the City of Centralia and operated by Airgo. The Airport can be contacted at 618-533-1643.

Barge, Rail and Truck at One Site

Located about 50 miles west of Carlyle, the Tri-City Port District is home to a 1,200 acre site at which goods and materials can be transferred from truck, train, and barge. The Port is located on the Mississippi River and within minutes of Interstates 70, 64, 55 and 270 and 255. 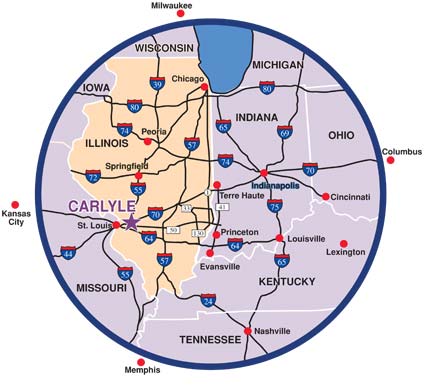 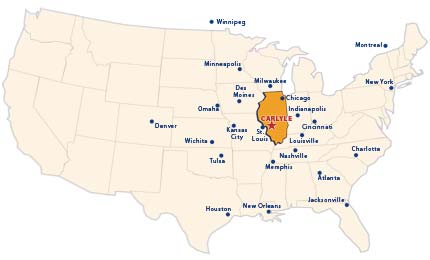